Out for a Royal stroll around London

Posted on April 9, 2011 by crystalburney

With Royal Wedding fever lingering in the air, London is a great place to visit and take your own “Royal Tour” of the city.

As someone who loves this city, I’ve found myself playing tour guide on several occasions (possibly a future career option if the journalism thing doesn’t work out!)

Crystal’s Walking Tour of London begins in Hyde Park. At over 350 acres, it’s one of London’s largest green spaces. Inside the park, you will find Diana Fountain, a memorial to Diana, Princess of Wales, which was opened by the Queen in 2004.

From here, walk through the Marble Arch to Buckingham Palace, where the world just witnessed William and Catherine’s first kiss as a married couple on the balcony. This has served as the Monarch’s London residence since Queen Victoria took the throne, but dates back to 1702 as the Duke of Buckingham’s city home. It’s the largest private house in London with 775 rooms! Weather permitting, you can catch the Changing of the Guard outside Buckingham Palace daily at 11:30 from May-July and on alternating days from August- April.

From the Palace, you can stroll past Canada Gate located at the entrance of Green Park before continuing down the Mall, or wander through St. James Park, past the pond where you’ll be greeted by swans and pelicans. 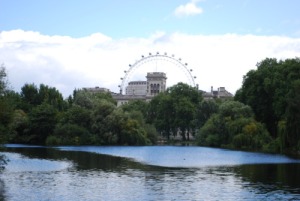 The tree-lined Mall endsat Trafalgar Square.  The National Gallery is located behind the notable Nelson’sColumn, which was built to commemorate Admiral Nelson’s naval victory in 1805.

The square also hosts a couple of impressive fountains and a giant ship in a bottle! 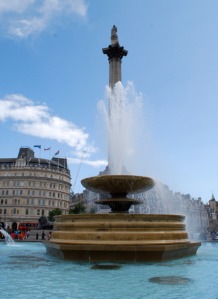 The mayor of London  recently banned pigeon food sellers in hopes that this would purge the square of the thousands of pigeons that call it home. So far, he hasn’t had much luck, as tourists continue to feed the birds.

From here you can continue on your tour by heading down Whitehall, which is lined with government buildings. Part way down Whitehall on the West side is 10 Downing Street, where the Prime Minister ‘s residence has been since 1792. At the South end of Whitehall you will find the Houses of Parliament and Big Ben. 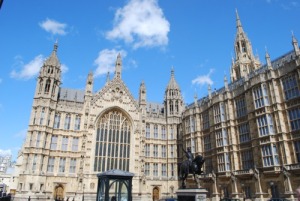 The current Parliament Buildings date back to 1840 after a fire destroyed the previous ones. During the summer opening when Parliament doesn’t sit, you can take a tour.

Next to the Houses of Parliament stands Big Ben. The famous old clock can be heard throughout the city as it strikes on the quarter hour.  A light in the clock tower signals when the House of Commons is in session.

The beautiful Westminster Abbey  where William and Catherine were married is located nearby.  The 700-year-old Abbey has been the venue for all but two coronations since William the Conqueror and many of the country’s monarchs and notable celebrities were buried here. 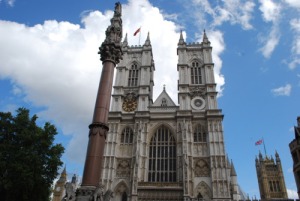 From there, the tour continues across the Thames River on Westminster Bridge after stopping for an excellent photo opportunity of Parliament before reaching Southbank.

Right across the river you’ll find the Aquarium and London Eye- the biggest observation wheel in the world, towering 135 m above the Thames River. The Eye takes 30 minutes to make a full rotation and on a clear day you will have a 25-mile panoramic view, so keep your cameras ready!

Continuing along Southbank you’ll find the National Theatre and the Tate Modern Gallery. The Tate has free admission and hosts modern and contemporary art from around the world. 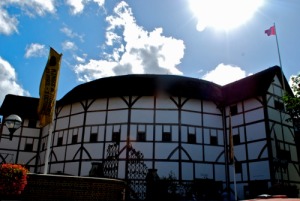 But, it’s Shakespeare’s Globe Theatre that generally attracts the largest crowds on this side of the Thames. The original Globe was built in the late 1500s and by 1599 it was up and running, thrivingfor 14 years with some of Shakespeare’s best known work. Then, in 1613, during a performance of Henry VIII, a cannon ignited the thatched fire and the theatre caught fire. It was quickly rebuilt this time but was closed under Puritan low in 1642 before being demolished in 1644. The current Globe was built in 1993 and continues to perform the best of Shakespeare.

Next, the tour continues back on the other side of the Thames River by crossing the Millennium Bridge and heading to St. Paul’s Cathedral.  A cathedral dedicated to St. Paul has been on this site since 604 AD!  The current cathedral is the fourth one to reside hereand was built between 1675 and 1710 after the previous one was destroyed by the Great Fire of London.

This gorgeous old cathedral has witnessed the weddings of many notable figures and its crypt is known as the foremost burial place, where those who have made an outstanding contribution to the life of the nation are now buried.

A short walk from here is Covent Garden, where you can take a break and get a much deserved drink or an ice cream cone and rest, wander through the shops or enjoy one of the many street performers found here!

If your feet aren’t killing you yet, you can continue on to Tower Bridge and Tower of London.

Tower Bridge is just over 100 years old and is one of the most famous attractions in London with its twin drawbridges.

Below the bridge, overlooking the river is the Tower of London. Made famous as a place of imprisonment and execution during King Henry VIII’s reign, it has also been used as a royal residence, an armoury, a mint, a menagerie, an observatory and safe place to display the Crown Jewels, a main attraction for many tourists. Some crown jewels have been there since 1327!

With all this and more easily reached on foot, on your next trip to London make sure you get out and enjoy this Royal City!