Posted on September 27, 2017 by crystalburney

You can’t go to Newfoundland without getting screeched in. (Well you can, but why would you give up the opportunity of becoming an honourary Newfoundlander?)

This was a chance I wasn’t going to miss and was told by a native of St. John’s (thanks Phill!) that the best place to go was Christian’s. So I signed up and sat at the bar with my Quidi Vidi 1892 beer, waiting for the ceremony to begin.

A Screech-In Ceremony has to be conducted by a native Newfoundlander. Ours entered with his paddle, wearing his Sou’wester. He did a little speech about Newfoundland and being a Newfoundlander and asked us all if we were ready to become honourary Newfoundlanders, to which we all responded with a firm “YES B’Y!”

He then asked us all our names and where we came from before handing us a piece of “Newfie Steak” (fried bologna) and continuing on with the ceremony, where we had a shot of screech (Jamaican Rum) and kissed a codfish. 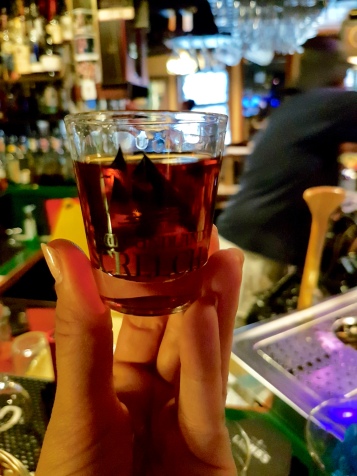 Before we were handed our certificates stating that we were now officially honourary Newfoundlanders, though, we had to recite an oath. When it was my turn, he asked, “Are ye a screecher?” I proudly replied, “Deed I is me ol’ cock, and long may yer big jib draw!” 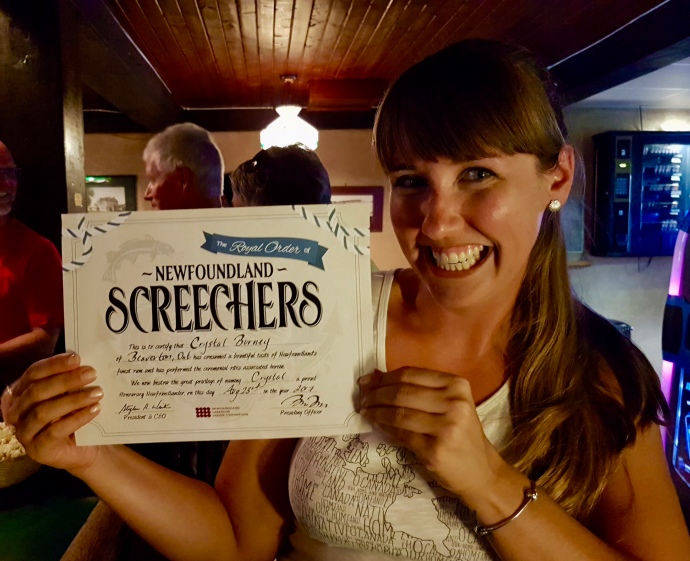 Posted on September 20, 2017 by crystalburney 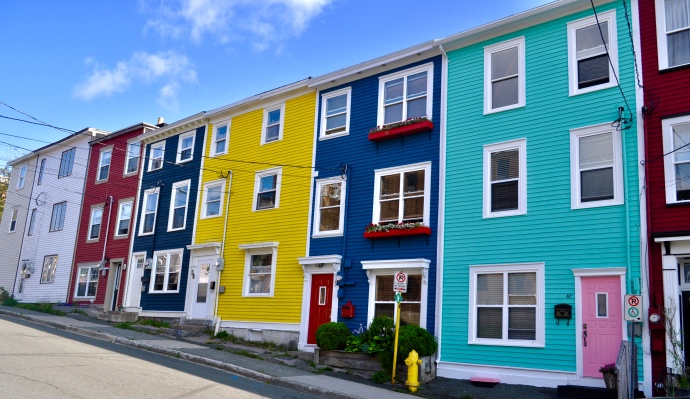 The brightly coloured houses known as “Jelly Bean Row” have become one of the most popular photos used in St. John’s, Newfoundland tourism, but if you come looking for a specific “row” of houses, you’ll be surprised to learn that these brightly coloured homes can be found all over the city.

Ranging from vibrant to pastel shades, a rainbow of colour hits you as you wander up and down St. John’s hilly streets. Many homes and shops are enhanced with “gingerbread” trims, in an equally bright, contrasting colour. 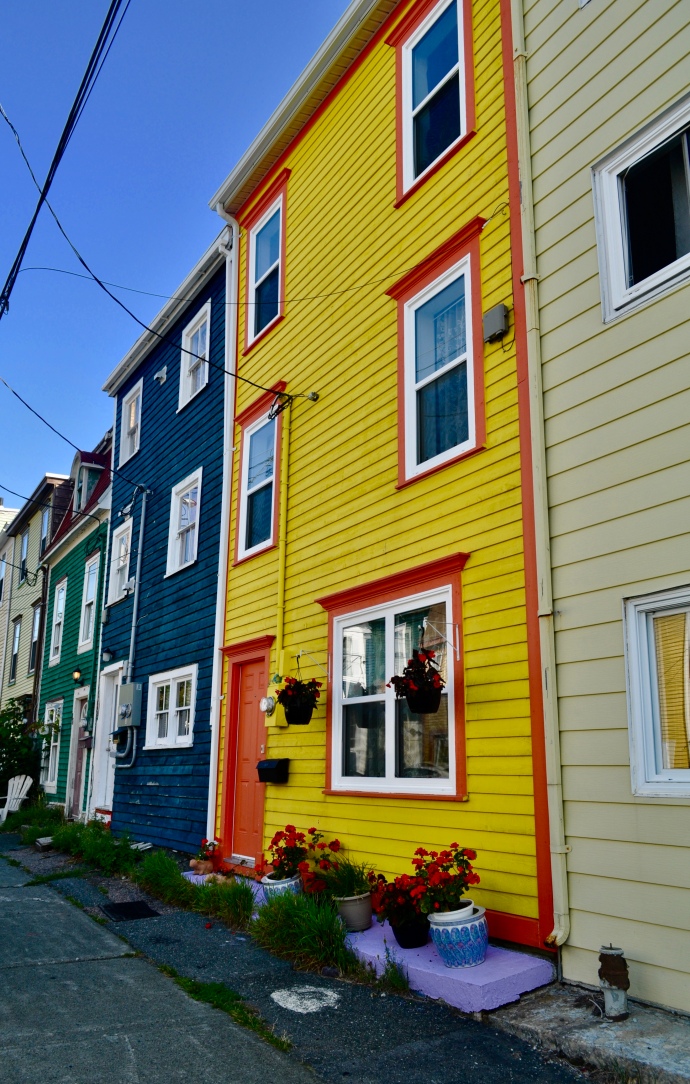 These houses were constructed as temporary accommodation after the Great Fire of 1892, but many remained as permanent residences.

So where did this colourful tradition come from?

Some say it started with the fishermen who painted their homes bright so they could find their way home in the fog (or after having a few too many drinks at the pub). It was also cheaper to buy large amounts of one colour of paint, so they’d paint their boats and their homes the same striking colour.

As fun as those stories are, the majority of the Jelly Bean houses appeared in the late 1970s as a way to inject new life into a rundown-looking city.

And they have certainly done their job. Walk along any street in St. John’s and you’ll come across a brightly coloured home (or a row of them!) Many even have Jelly Bean Row mailboxes posted out front, adding just one more splash of light to these already sunny homes! 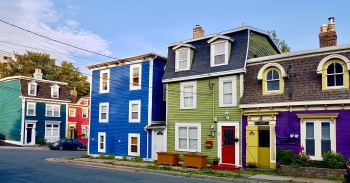 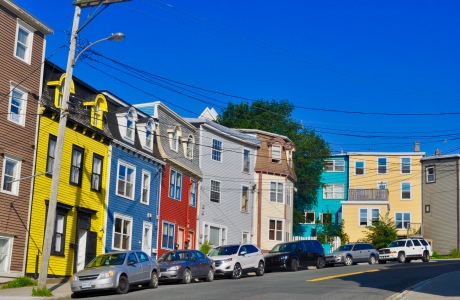 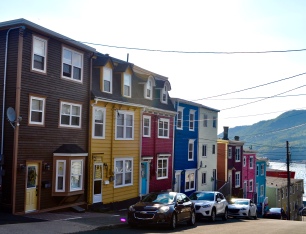 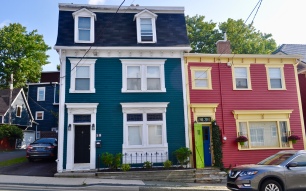 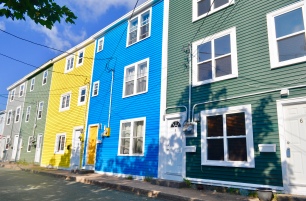 Posted on September 12, 2017 by crystalburney

I still remember the shocked feeling I had 16 years ago today when my English teacher wheeled in a television for my class to watch as the second plane crashed into the World Trade Centre.  The feelings of confusion as to why someone would deliberately harm so many innocent people mixed with the sadness for all those who were killed.

Fast forward 16 years and I still sit here with those same feelings, but one now stands out above the rest – the feeling of what those flight crew members must have been thinking in those final minutes before their plane crashed. Becoming a flight attendant added another level to my feeling of loss surrounding September 11th.

Over the past year, I have been completely obsessed with the musical “Come From Away,” and especially with the character of Beverley Bass, the first female American Airlines captain in history. She was one of the pilots who found themselves landing in Gander, Newfoundland after the American airspace was closed following the attacks on September 11th, 2001.  She sings about her love of aviation, working her way up as a female in a male-dominated profession, and how she felt that day learning that someone took the thing she loved most and turned it into a weapon:

“When suddenly someone on air to air traffic says
At 8:46 there’s been a terrorist action”
And the one thing I loved more than anything was used as the bomb
Suddenly I’m in a hotel
Suddenly something has died
Suddenly there’s something in between me and the sky”

Me and the Sky- Jen Colella, Come From Away (short version)

That feeling of having something you love being used in such a horrific way brings me to tears every time I listen to this song.

The musical is based on true accounts of the days that followed September 11th, when 38 planes bound for the United States were grounded in Gander, Newfoundland.

There is also a book, “The Day the World Came to Town- 9/11 in Gander, Newfoundland”, that shares stories from passengers, crew and the townspeople who generously dropped everything and opened their doors to the “plane people” who arrived in their small town. 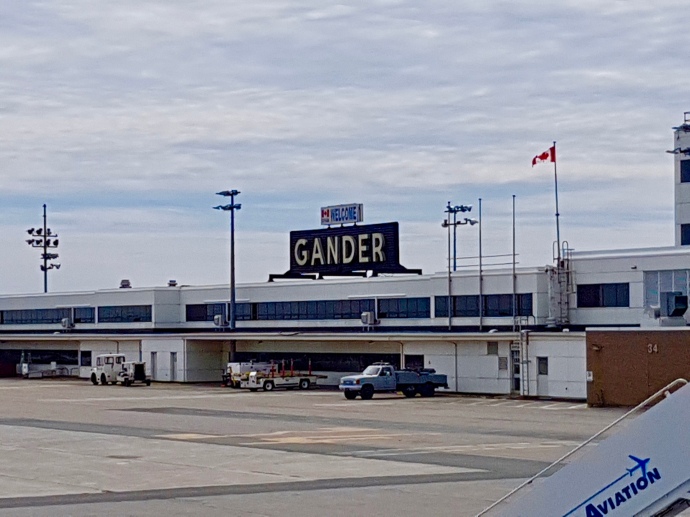 On a flight this summer, I found myself stopping in Gander. Looking out at the small airport, it was hard to imagine 38 planes and 6,595 passengers and crew members arriving here, in a town with around 10,000 living in it.

In a time of terror around the world, these Newfoundlanders did everything they could to make their unexpected guests feel safe. Both the musical and the book share stories of love, compassion and the unselfish desire to help those in need.

Categories: Blog, North America, Where in the World | Tags: Come From Away, Flight Attendant, Gander, Newfoundland, September 11, The Day The World Came To Town | 1 Comment