Wanderlust in her heart

Posted on November 29, 2017 by crystalburney

Finding ‘Crystals’ around the world

Posted on November 22, 2017 by crystalburney

I’ve always enjoyed seeking out ‘Crystals’ in my travels around the world.

From the beautiful Crystal shops in Hungary and the Cristal beer in Cuba to swimming with manatees in Crystal River, Florida to these shining Crystals at the Galaxy in Macau.

A Crystal with the Crystals!

‘Crystal Lobby’ at the Galaxy Macau

So when I heard there was a Crystal Pagoda in the small village of Ban Thaton, where we were staying, near Chiang Mai in Northern Thailand, I just had to go see it for myself.

Wat Thaton is a large temple complex located at the top of a hill overlooking the Mae Kok River. It turned out to be quite a hike up into the hills surrounding Ban Thaton, near the border of Myanmar.  The view on the hike up was incredible.

View from the top

Looking down over Ban Thaton and the Mae Kok River

The temple complex is built on several levels, hosting statues, temple buildings and a Buddhist school on the way up to the top. 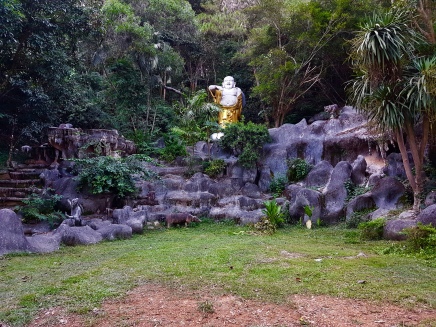 While the hike itself was beautiful and all the statues and buildings on the way up were great, none were as striking as the Chedi Kaew or Crystal Pagoda. 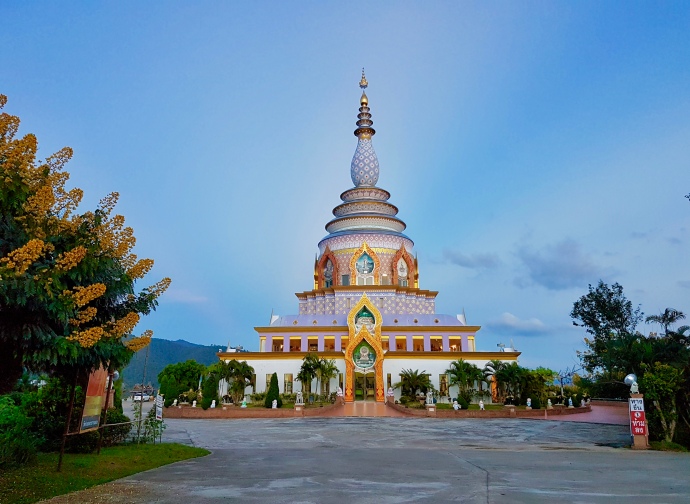 Sitting at the top of the hill, this colourful building can be seen from miles way.  The structure is covered with intricate designs depicting the Buddha’s teachings.

Wandering inside, we found a large number of Buddha statues coming from many different countries.  In the centre of the Chedi Kaew is a spiral platform that leads to the top level of the building, with more artifacts found along the way.

The Wat Thaton organizes several programs to benefit the local community. A project for local children and hill tribe children aims to bring several communities living in the area closer together. 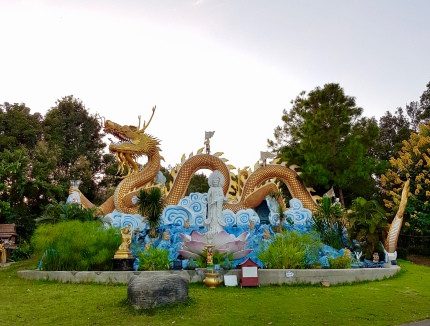 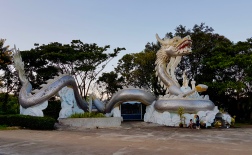 One of the monuments on the complex grounds 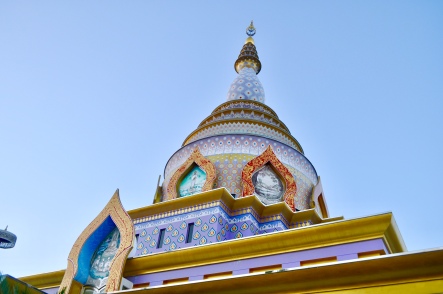 The colourful roof of the Crystal Pagoda

The Chedi Kaew all lit up at night

Within the complex , there is a Buddhist school for monks and novices and a Vipassana meditation center. You can also find a herbal medicine center, a restaurant, a large meeting hall and several other buildings.

So, if you’re headed to Northern Thailand, pack your hiking shoes and visit the beautiful Crystal Pagoda. The Wat Thaton is open from 8 am until 5 pm. Admission is free and the view is incredible!

Posted on November 15, 2017 by crystalburney

While in Northern Thailand, what better way to travel from one place to another than by traditional long boat?

View from our patio 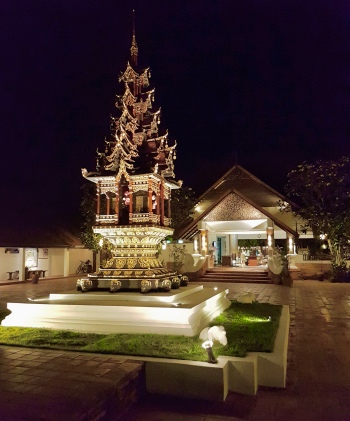 The Legend lit up at night

After a delicious breakfast in the morning, we made our way down to the dock, where a long boat was waiting to take us along the Mae Kok River to our next spot. 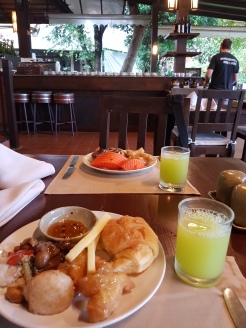 Breakfast at The Legend

Morning on the Mae Kok River

It was a long 6 hour journey, but it was peaceful out on the river with hardly anyone else in sight most of the journey and the landscape we stunning.

Long boats along the river bank

Cow on the river bank

Everything was so green 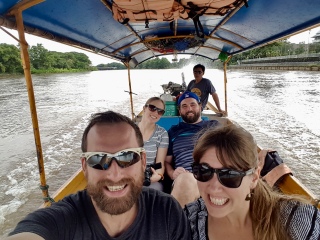 The long boat crew along with our very skilled captain! 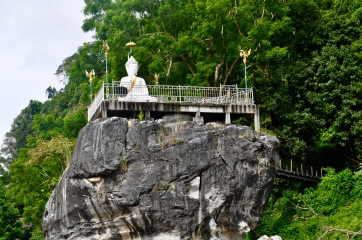 One of the Buddha statues along the river

Our long boat captain knew the river like the back of his hand, easily maneuvering through the sometimes very shallow, sometimes very rough water, knowing exactly where any dangers like rocks or sandbars were hiding.

Along the way, we stopped at the Ruammit Elephant Camp in Karen Village. While you could ride them here, we decided against that and instead spent our time feeding and petting these incredible animals, before heading across the street for a delicious Thai lunch. 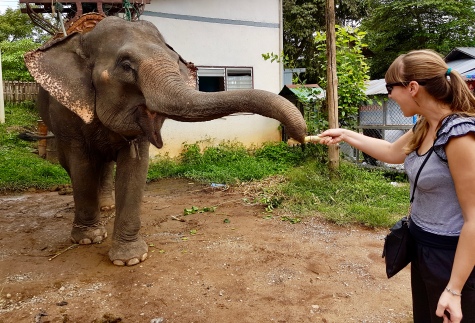 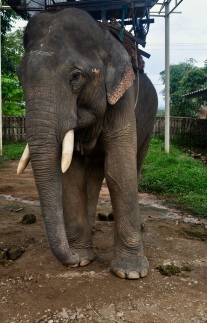 Such a beautiful animal 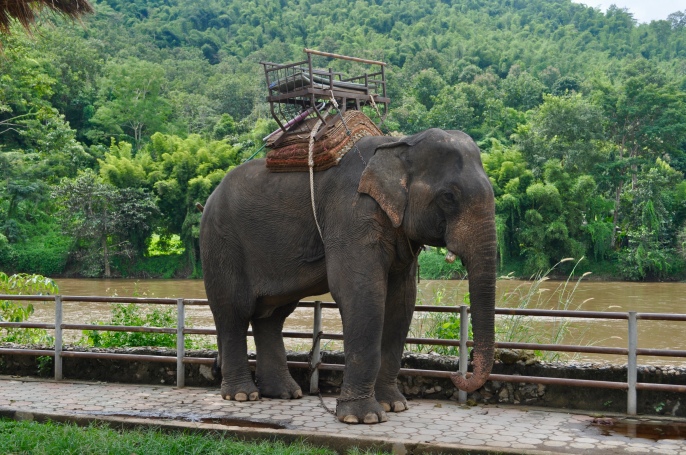 Elephant along the Mae Kok River

Continuing along, we made it to our final destination, the Maekok River Village Resort, another incredible resort on the banks of the Mae Kok.

Such beautiful grounds at the Maekok River Village Resort

The grounds here were lush and filled with flowers and you could wake up and have breakfast each morning with a view looking out over the Mae Kok River.

Beautiful flowers found all over the resort

Evening at the pool

While it may take longer, if you are travelling around Northern Thailand, consider taking a long boat. You won’t regret it!

Posted on November 1, 2017 by crystalburney 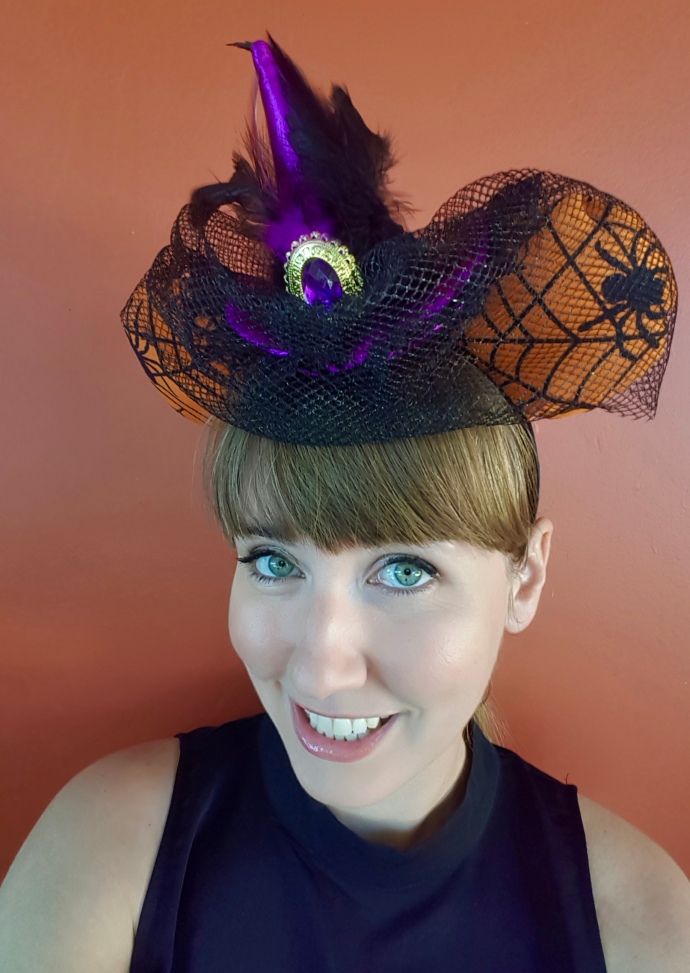 Halloween is my favourite holiday. I love the decorations, Hocus Pocus, carving pumpkins, and most of all – dressing up. It’s a magical holiday, so what better place to celebrate than at one of the most magical places on earth! Disney World is one of my favourite places to visit and I’ve always wanted to celebrate the most wonderful time of the year with the magic of the park. So this year, I headed to Magic Kingdom for Mickey’s Not-So-Scary Halloween Party to celebrate Halloween with Mickey and the gang. 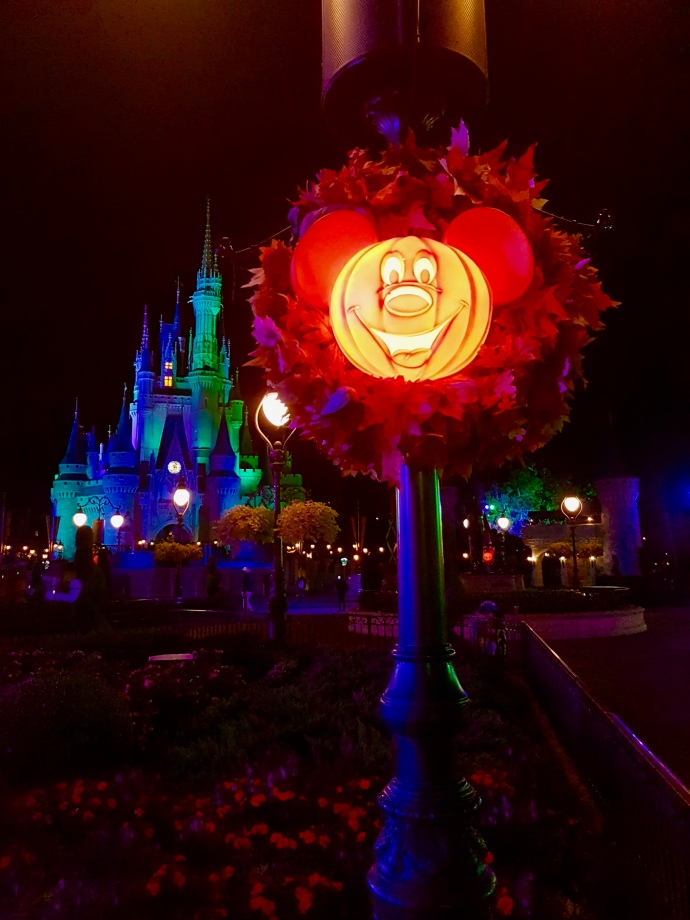 The event is a separate ticketed event that runs certain evenings from the end of August until November 1st.  Once you get your wristband, you are given a bag to go trick or treating!here were Treat locations set all over the park where you could go to get candy. There were also lots of characters out for photos and autographs, including those who aren’t normally out like Jack and Sally from The Nightmare Before Christmas

Trick or Treating around Magic Kingdom!

There were Treat locations set all over the park where you could go to get candy. There are also lot’s of characters out for photos and autographs, including those who aren’t normally out like Jack and Sally from The Nightmare Before Christmas. 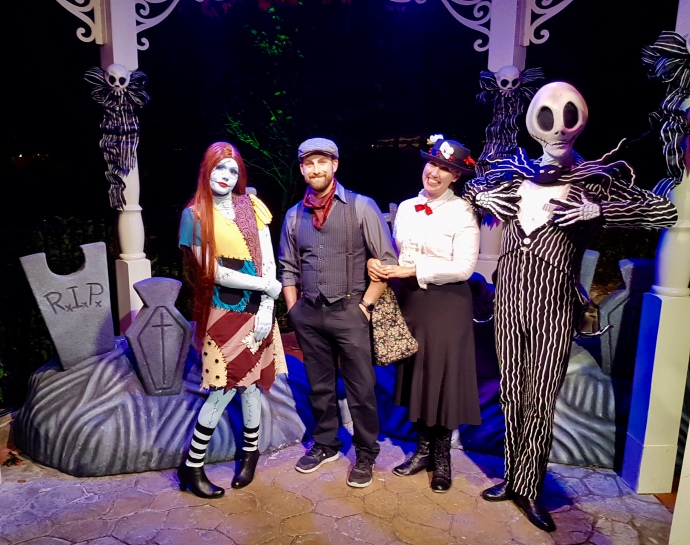 In Tomorrowland, you can join Mike Wazowski, Sulley and Boo for a Monstrous Scream-O-Ween Ball – a fun dance party with all your favourite songs. 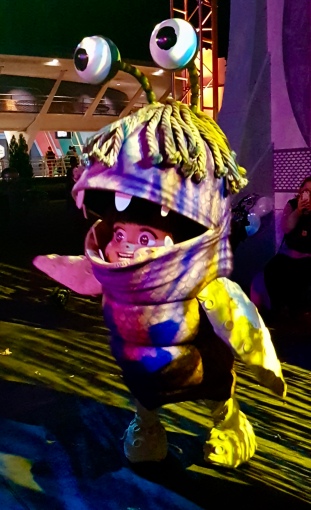 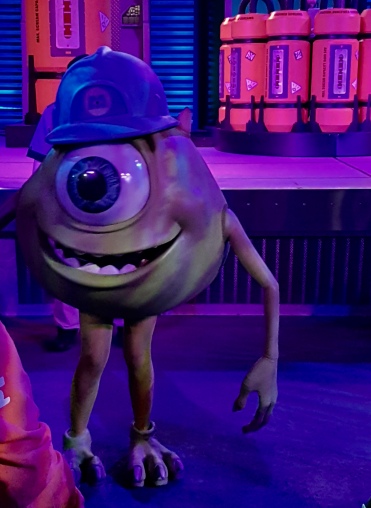 Not all of the rides are open, but there’s still a good selection for those wishing to enjoy them (including The Haunted Mansion, the perfect ride for this time of year!) 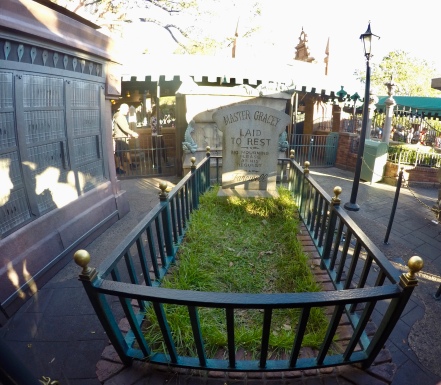 Graves at the Haunted Mansion

Singing Ghouls in the Haunted Mansion 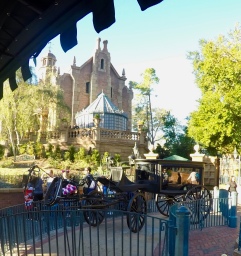 Mickey’s “Boo-To-You” Halloween Parade makes its way through the park at 9:15 and 11:15, filled with Mickey and friends as well as a number of villains.

One of the main reasons I wanted to go was to see The Sanderson Sisters in the Hocus Pocus Villain Spelltacular! The sisters were back for the night to brew a potion to create the most Villainous Halloween Party the Kingdom has ever seen.  They were joined by a variety of Disney’s greatest villains and ended with their iconic song.

As always, there was a great fireworks show over Cinderella Castle. This one had a Halloween theme. “Happy Hallowishes” invites you to join the 999 happy haunts for an evening of fun!

It was a great night at the park with all of Magic Kingdom decorated for Halloween, but one of my very favourite parts was getting to dress up in costume and seeing everyone else dressed up, wandering around this magical place! 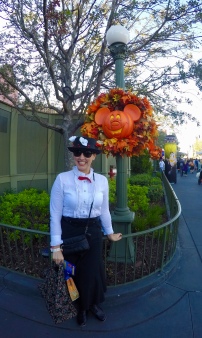 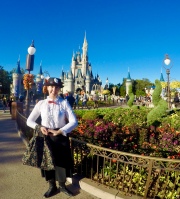 I loved dressing up at the park

The Nightmare Before Christmas photo area 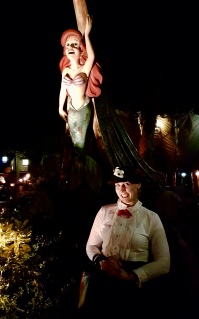 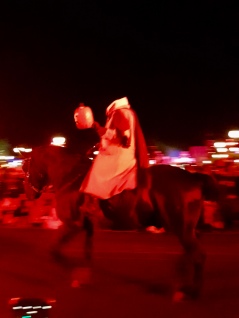 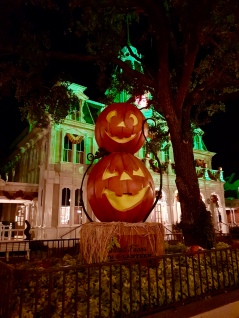 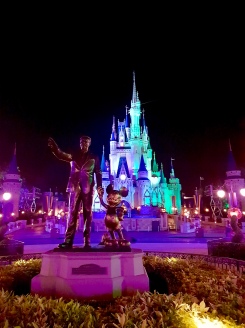 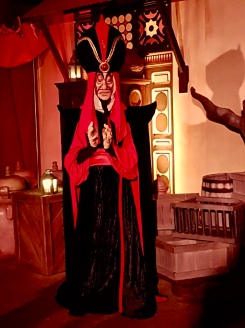 Jafar was out with the other villains for Halloween 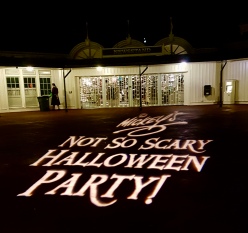 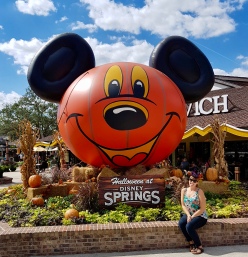 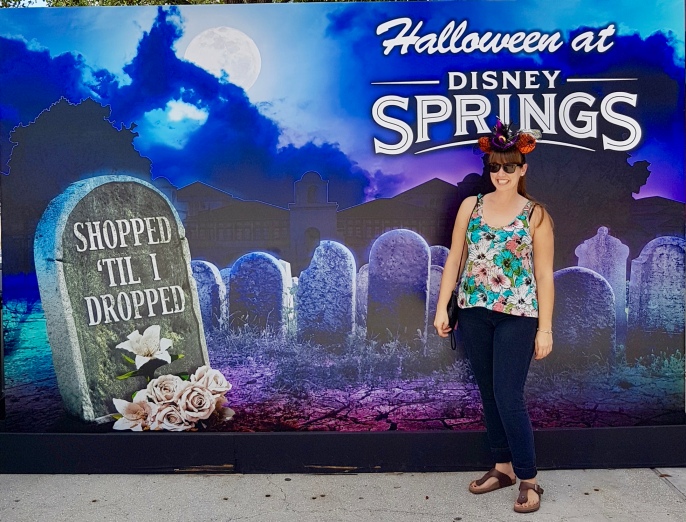 Shopped ’til I dropped

Mickey’s Not-So-Scary Halloween Party runs from 7pm-12am on certain dates during the Halloween season, but you can typically start entering the park as of 4pm. Just be sure to get your wristband as only party guests are allowed in the park after 7pm.

Be sure to check out the costume guidelines on the website before planning what character you want to be.

Treat bags are fairly small, so if you want to hit all the locations, you might want to bring a bigger bag or buy one at the park.

The character lines are LONG, especially Jack and Sally. They are out before the party officially starts, so you can get in line early or try later at night. 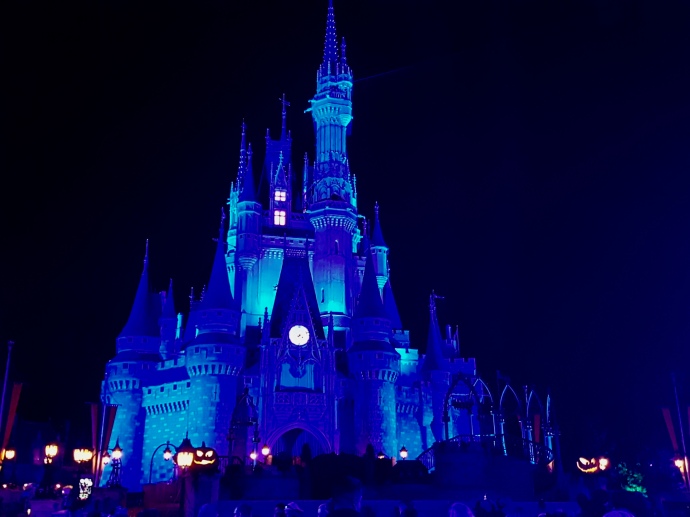