We tried to sneak in without being noticed, hoping the noise they were making would hide us, but as soon as we turned the corner, we were spotted!! ‘MZUNGU” the Swahili word for ‘white person’ was now being screamed from every corner of the dining hall as at least a dozen children come running at us. They only stop once they had grasped onto a hand, arm, leg, pocket or whatever they could reach and begin shouting “How are you?” over and over again.

When I came to Kenya in 2008, I lived in an orphanage and spent three months playing and giving hugs and attention to my 32 affection starved children. Since then, the orphanage I was at has closed, so this time I went to visit one of the homes some of the other volunteers were placed at.

The smell hit me the moment I walked through the door and the dirty conditions were hard to bare considering to all these little kids, this place was home. With several kids clinging to each of us, myself and the four other people I was with made our way outside and started blowing up balloons. This turned into utter chaos in a matter of minutes as everyone began fighting over them, trying to get more than one and stealing them from each other. Then some began popping them, which lead to tears and tantrums.

It was an overwhelming experience being back in an orphanage, especially one where none of the workers seemed to actually care about the kids. They all just have to fend for themselves from the time they can walk. It’s hard to watch.

From here, we went to another children’s home on the other side of Nairobi. Based on the sketchy location we drove through, we were all a little afraid of what we would find behind the steel gate. Thankfully, we were all pleasantly surprised by the well-organized home we found there. This place was basically self-sufficient, with cows, goats, fish, chickens, ducks, fruit trees, veggie gardens and a bread maker. This allows them to grow/make most of the food right there so the children get a balanced diet, something many children here go without. 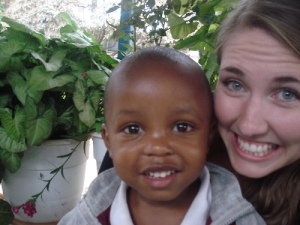 Spending an afternmoon with some incredible kids at one of Kenya’s many orphanages. 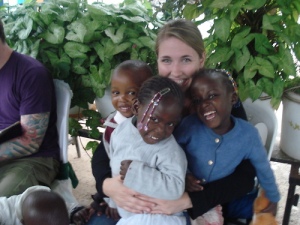 As we sat down to tea, one of the ladies who runs this home told us about the house and explained that they receive a lot of outside funding. Since orphanges don’t really get any funding from the government here, the difference outside funding makes is incredible.

Soon, a group of about 15 children ages two to five came walking out in an organized line, singing. They had come out to greet us accompanied by their house mom, who actually seemed to genuinely care about them. This sight was the complete opposite from what we witnessed this morning. The kids all climbed up into our laps, with clean clothes and smiling faces. Soon, the cameras came out and they all wanted their photo taken. Then seeing themselves, they would shriek with laughter and ask you to take another one. It was an absolutely delightful afternoon with some beautiful, sweet children. With the staggering amount of Kenyan children currently living in orphanages, I wish more of them were like this one. Seeing happy, healthy kids this afternoon really shows what a difference some outside funding and inside love can do to change a child’s life here.