A trip to the Maasai Village 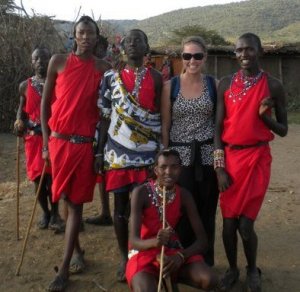 Wrapped in bright red, royal purple and brilliant blue, several Maasai men greet us as we wander up to their village. The chief’s son welcomes us and after receiving payment, leads us to the entrance of the village where a group of young women begin to sing traditional Maasai songs. Also brightly dressed, the women’s attire includes intricately beaded necklaces,earrings and bracelets. As the singing comes to an end, the young men take the stage. They begin performing a mash up of traditional dances including the wedding dance and the killing of the lamb dance.  The music is a haunting mixture of guttural tribal noises blended together by the young men, who were also draped in beautiful Maasai beading.

I am told that in order to become a man in Maasai culture these boys must spend a year or two as a warrior, protecting the family from wild animals. During this time they must also kill a lion and be circumcised at age 15. This ritual happens in front of the rest of the tribe -and we think being a teenager in North America is tough.
The nomadic Maasai are one of the only tribes left in East Africa who still live a fairly tribal existence out in the wild. They are a polygamous tribe, with most men having at least three or four wives.The chief’s son explains that it is the women of the village who build the huts for their husbands to live in. These huts are made of sticks held together by wet cow dung and mud. Likely not everyone’s idea of the perfect home! The flies begin to swarm the moment you get near the huts and while everyone here seems used to having flies landing on them, the buzzing soon begins to drive me crazy.
After learning a bit about the huts or Kraals, the chief’s son leads us inside one of them to have a look around. As we step through the door we find ourselves in complete darkness as there are no windows inside these huts. After a few seconds my eyes adjust and I begin to take in the surroundings. The house has two tiny bedrooms with beds made of sticks and straw and covered in a cow hide blanket and a central kitchen with a fire pit. A woman sits by the fire, cradling her baby while she makes tea. With only a small vent in the ceiling, the hut is soon filled with smoke as we sit in the dark kitchen listening to the chief’s son talk about the Maasai culture and diet. The tribe survives almost exclusively on the milk, meat and blood (yes blood) of their cows and goats. By the door there is another small room where the young cows and goats sleep at night to protect them from lions and other predators. Livestock is an important part of Maasai culture, as it not only provides the tribe with food, but is also a sign of wealth and used in negotiating dowries.

Back outside, a group of young men gather to show us how they make fire using only hard wood and soft wood. After several failed attempts, the chief’s son steps in to show the young ones how it’s done. After a minute of twisting the wood together he has a blazing fire going. It really is quite impressive! As we wander through the village, a group of children shyly make their way up to us. It doesn’t take long for this shyness to disappear as the picture taking begins. Soon, they are squealing with laughter at the sight of themselves and more children come out to join in the fun.  The Maasai way of life couldn’t be more different from my own, but in the middle of cow dung huts and mugs full of blood I’m reminded that no matter where you are and how different life is there, the one constant is children being children!