Posted on September 20, 2010 by crystalburney

Every year 1000s of performers hit the stage as part of the world’s largest arts festival- The Edinburgh Fringe.

With only two days in Edinburgh, I grabbed my 340 page fringe guide and set out to make the most of my first time at the world famous festival.  For 64 years, the Edinburgh Fringe has been delighting festival goers for three weeks every August.  It’s widely regarded as the largest arts festival in the world and this year’s fringe hosted 1000s of performers entertaining audiences in over 2400 shows.

The Fringe dates back to 1947, when eight theatre groups turned up at the Edinburgh International Festival.  This festival was an initiative created to celebrate and enrich the cultural aspect of European life in the wake of the Second World War. The actors were not invited to be part of the official programme, but that didn’t stop them.  Determined to have their work seen, they went ahead and performed anyway. The next year, other theatre troupes followed their lead. This continued year after year, with each festival bringing more and more “uninvited” performers. Finally, in 1959, the Festival Fringe Society was created in response to the success of this growing trend and every year since this festival just gets bigger and better.

With so many options, you need to come into this festival with a plan. However, after being on an overnight bus from London and not really knowing what to expect, I arrive in Edinburgh completely plan-less.  This is when then both the half-price hut and wandering the Royal Mile come in handy.

The half-price hut is located just off Princes Street and lists what shows are half-price that day. The list changes constantly, so lots of options are always available. This is where I start my day, trying to figure out what show I want to see first. The great thing about this hut is you can get your ticket for as low as two pounds, so even if the show you end up seeing is one you wish you hadn’t (as my first one was) you haven’t wasted your money!

The Royal Mile is also a great place to walk around if you aren’t sure what to see and want to hear more about the 100s of shows playing that day.  The street is filled with performers in costumes and volunteers passing out handbills, promoting their shows. You can’t go more than a few steps without being stopped by someone telling you what’s great about their show and why you absolutely need to go see it. This provides a great opportunity to find out more about the show and decided whether or not it’s for you. You can catch sneak peeks of certain shows being performed along the Royal Mile as well. This is great when you want help choosing what show you want to see next-but not so great when you just want to get down the street! 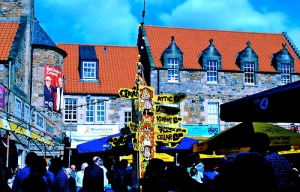 Multiple Fringe stages can be found at the Pleasance Courtyard- Edinburgh, Scotland

The various theatre venues are spread out all across the city. Some are out in the open and easy to find, like churches,  while others require a treasure map and some help from the locals to track down, like the random ones found in pub basements or in the back of garages. But I guess with 2400 shows, you’ve got to get creative with your stage space!

Over my two day fringe binge, I managed to catch one play( Miss Julie), 2 musicals (Hamlet the Musical and Reel to Real– both AMAZING), 2 music events and a ton of street performances ranging from juggling to comedy sketches to magic tricks to my personal favourite- a woman seeing how many men she could balance on while wearing a ridiculously sparkly outfit and crazy blue wig!

With categories including theatre, dance, comedy, physical theatre, musicals, opera, children’s shows and music events, no matter what you want to see, the Edinburgh Fringe has something for everyone.