The Cheap(er) Side of Vegas

I had always wanted to go to Las Vegas for my 30th birthday. Not because I’m a big gambler or like to party all night, but because I hoped all the bright lights, showy hotels and casinos and crowds would distract me from the fact that I was about to leave my twenties behind.

We all know Vegas can be a very pricey city between fancy restaurants, big hotels and a casino every ten steps beckoning you to come in and light your money on fire. But there are also ways to do Sin City on a smaller budget – you just need to look around.

First of all, check out all the FREE things!

When you think of Vegas, most people think of gambling, which is certainly not free, but many other things are.

Here are a few of my favourites:

A trip to Vegas just wouldn’t be complete without posing by the “Welcome to Fabulous Las Vegas” sign, located just over half a mile south of Mandalay Bay. 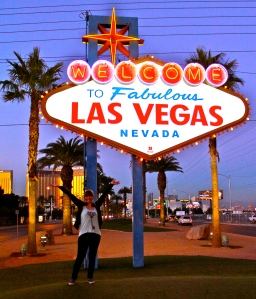 The eight-acre, ice blue lake out front of the Bellagio is a gorgeous sight any time of day, but when the Fountains of Bellagio erupt into a beautiful water ballet, dancing to popular classics and Broadway tunes every 30 minutes during the day and every 15 minutes from 7p.m. to midnight, it’s definitely one of the best free shows in Vegas. 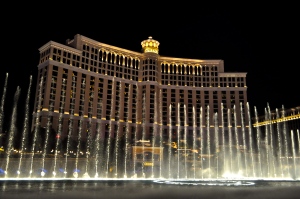 You can get a front row seat along Las Vegas Blvd, or for an even better view, check out the fountain show from the top of the Eiffel Tower across the street. 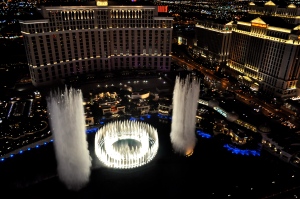 Looking down at the Bellagio fountain show from the Eiffel Tower.

Walking around Vegas can be exhausting and while the bus is fairly inexpensive, for shorter jaunts, the Strip has three free monorails.  (There’s a fourth, longer one, but that one isn’t free.) The routes each connect several hotels: Mandalay Bay-Luxor-Excalibur; Monte Carlo-Aria-Bellagio; and Mirage-Treasure Island.

The volcano erupting outside the Mirage

Every hour after dusk, the Mirage Volcano erupts in a fiery show making you feel like you’re in the middle of the jungle while walking along the Strip.

One of the pirate ships docked outside Treasure Island

Take the free shuttle from Caesar’s Palace to Silverton’s Casino off the Strip to catch the Mermaids swimming along with 4,000 tropical fish, stingrays and sharks. 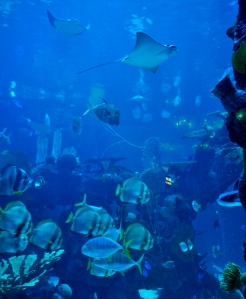 The aquarium at the Silverton Casino

You can also check out the fresh water aquariums located in the Las Vegas Bass Pro Shops. (Note: the mermaid show was cancelled the day I was there so we just saw the aquarium) 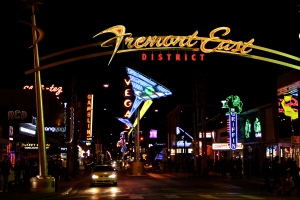 A trip downtown, to where Vegas began in 1905 when the railroad arrived, is definitely worth it. Here, the cheaper bars, restaurants and no-nonsense casinos are said to represent the ‘real’ Las Vegas.

The downtown casinos decided to put a roof over four city blocks and re-name the area the Fremont Street Experience. 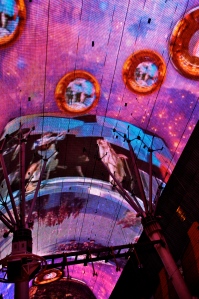 The ceiling becomes a movie screen, lighting up the downtown area.

Every hour on the hour, the ceiling becomes a massive movie screen, with music and images flying above your head. There are also several stages set up where live bands pump out classic rock tunes.

Take a break from walking through massive Caesar’s Palace and check out the adorable Australian pot-bellied seahorse at the Seahorse Lounge.

Of course the biggest free attraction in fabulous Las Vegas is the Strip itself. You can spend hours wandering the streets and touring through the hotels and casinos.

You can travel theworld walking along Las Vegas Blvd, spotting the pyramids of Eygpt at the Luxor

and the Statue of Liberty in New York, New York.

Then it’s onto Paris with the Eiffel Tower, Arc de Triomphe, the opera and a Montgolfier hot air balloon.

Then Rome, with the Colosseum and Forum shops where the ceiling is designed to look like the skyline of ancient Rome, cycling hourly between the blue of day and the orange glow of night. 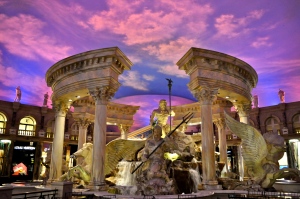 Next, onto Venice, complete with gondolas on the Grand Canal and San Marco square.

By night, the lights of all the hotels light up the city and make for a beautiful evening stroll (and sparkling photo-ops!)

The Luxor at night

While not everything can be free, there are a number of cheaper Vegas options out there as well.

Unless you plan to stay in your hotel and gamble your whole vacation away, you’ll likely be doing a lot of walking. The Deuce bus goes up and down the Strip and all the way up to Fremont Street.  A 2-hour pass is $6, a day pass is $8 and you can get a 3-day pass for $20 (which, depending on where your hotel is and what you plan to do, can be well worth it). Just be sure to buy your ticket from the vending machine before boarding.

To make your gambling money stretch a little bit further, head up to Old Las Vegas and the Fremont Street casinos. Here you’ll find famous casinos like the Golden Nugget and the Golden Gate, (which opened in 1906, a year after Vegas itself) but also smaller ones like the Mermaid.

The cocktail waitresses tend to pay a little more attention to everyone here and as long as you’re gambling, you’ll have a new drink before you even finish your last – just be sure to tip your waitress a dollar a drink.

Get discount tickets for shows like Jubilee at Tix-4-tonight

Tix-4-Tonight  has discount tickets up to 50% off any show that isn’t sold out for that night and sometimes the following night.  They are totally legit and can save you big money on your Vegas show tickets. They also have deals for dinner and other Vegas attractions. There are numerous booths located along the Strip. 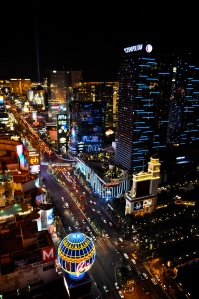 The Eiffel Tower offers the best photos of the Strip, especially once all the lights are on.  Day rates are $11.50, but jump to $16.50 after 7p.m.  If you’re visiting in the winter months, head to the tower around 6p.m. to catch the day rate and all the lights. 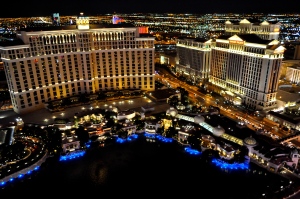 Plus, if you time it right, you can catch the Bellagio Fountain show at either 6 or 6:30p.m.

Las Vegas is known for its all-you-can-eat Buffets.  But to save some money, head to the buffet for breakfast or lunch instead of dinner as prices tend to be much lower.

There are also many smaller restaurants just off the Strip or buried behind casinos that offer great deals.