Sleeping on ice at the Hotel de Glace

Let me start by saying that I’m a beach girl.  I love the sand, the sun and the heat.  Although I grew up in small-town Canada, where as a kid, snow meant days off school, snow forts and tobogganing, I have long since outgrown my love of winter.  Even though I spend my time shivering and wearing multiple layers as soon as the temperature starts to hover around the freezing mark (and trying to stay indoors as much as possible once it goes below -10), this year, I decided that sleeping on a bed of ice sounded like a great idea!

I’ve seen photos of the Hotel de Glace in Quebec City for years and always wondered what it would actually be like to stay there.  So this year, I booked a room and set off to find out.

Of course, the day before we arrived, Quebec City had been hit with a major snowstorm and the temperature was sticking between -20 and -23 degrees celsius – perfect weather for sleeping in a room made of snow on a bed made of ice….

Welcome to the Hotel de Glace

The grounds at the Hotel de Glace.

Upon arriving, I almost forgot how cold I was. The Hotel de Glace is incredible. I felt like I had stepped inside the Disney movie Frozen, into a palace created by Elsa herself.  Now in its 16th year, the theme at the hotel this year was “Rivers.”  Here, dozens of artisans work to create a truly magical world of ice and snow.  Each year, the hotel opens in early January and runs until the end of March. The hotel is built in four phases throughout the month of January.

Map of the Hotel de Glace, stating when each of the four phases were completed.

The Hotel de Glace has 44 rooms, 16 of which are suites, each sculpted with a different River theme: an African river with hippos; an Arctic one filled with polar bears; a whitewater raft where the rafters have been thrown overboard and more. The rest of the rooms feature a bed made of a block of ice and a bedside ice table.

The hotel also has several ice bars, where you can have a drink served in a glass made of ice.

In the centre of the hotel is an ice slide surrounded by an orchestra of sculpted penguins.

You can even get married in the chapel here, if a frozen tundra theme is what you’re going for. (Personally, once again I’d prefer a sandy beach!) 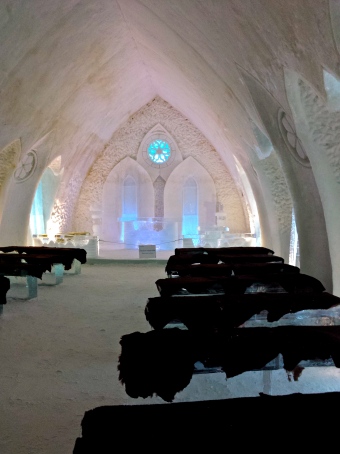 After checking in, we set out to explore, humming songs from Frozen along the way.  Before dinner, we had an orientation session. Here, we learned how to properly get into our Arctic sleeping bags and what to do to stay warm. The key lesson here was “If you sweat, you die.”  While layers during the day were a necessity, at night they would most likely leave you shivering.

During the day, the hotel is open to the public, so you can only access your room after 9pm.  This is also the time when the hot tubs and saunas open.  After freezing all day, a nice soak in the hot tub was in order before drying off in the sauna and heading to our room to try and get some sleep, all the while chanting my mantra for the evening: “You will not have to pee. You will not have to pee.” Once I finally got myself situated in my sleeping bag and blew out the candle, I was not getting up for anything.

Our ice bed for the night 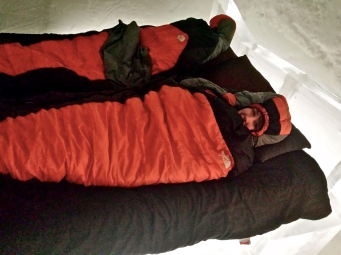 All bundled up in my sleeping bag

Sleeping on a block of ice turned out to be exactly how it sounds.  While there was a mattress on top of the ice, some of the coldness still seeped through. Every time you rolled over, you’d have to re-warm the surface under you. I had the hood of my sleeping bag pulled so tight, only my eyes could be seen (and I even had them tucked inside most of the night). Sleeping like a mummy inside my sleeping bag took some getting used to, but eventually I did manage to fall asleep – at least for a little while.

I made it through the night! 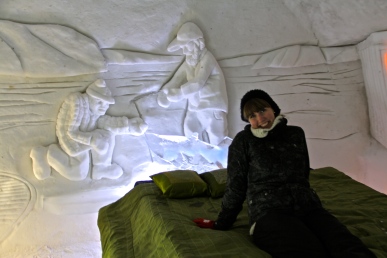 What an incredible experience. I had channeled my inner Elsa (although really the cold DOES bother me…a lot) and checked another item off my travel list. I usually leave a place wanting to go back, and this is one I’d love to see again. Although next time, I’ll opt for the day trip option!

The front foyer of the Hotel de Glace

The snowy corridor of the Hotel de Glace

I always find a mermaid!

The apple tree, with actual apples frozen into the branches.

The Mammoth guards the ice slide

Getting ready to go down the slide

The penguin orchestra by the ice slide

Elephants at the bar

Trying to warm up by the fire

“Another round bar keep” 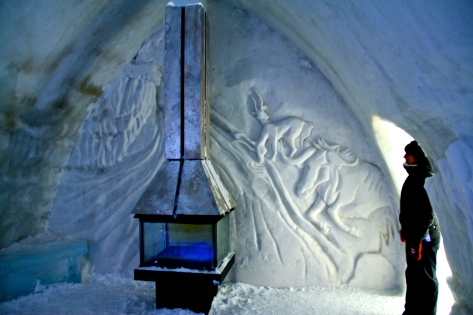 Fire place in the African suite 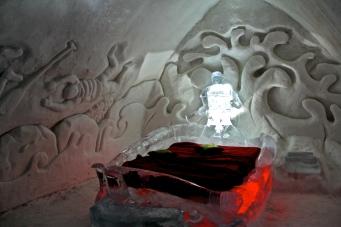 ‘Man overboard’…or over bed in this raft suite

Catching a ride on an ice mobile 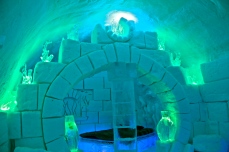 Under the sea suite

Sleeping with the fishes…

Our bed for the night

All bundled up for my icy sleep!