The bones of Paris

For many, Paris, the ‘city of love,’ conjures images of romance, architecture and art. But once you’ve had your fill of the Mona Lisa and sipping champagne beneath the Eiffel Tower, a different side of Paris awaits. For this, you need to head down – about 20 metres below the city streets, where the catacombs wait.

Located across the street from the Denfert-Rochereau station, is the entrance to the Catacombs of Paris. Here in the underground ossuaries lie the remains of more than six million people. The bones are laid in a small part of a tunnel network built to consolidate Paris’ ancient stone mines.

During the late 1700’s, many of the city’s cemeteries had reached capacity. Some, including the Saints-Innocents (Cemetery of the Innocents) had gone beyond capacity. Here, people were buried in mass graves, piled one on top of the other until it became a source of infection for those nearby.  In late 1785, the Council of the State closed the cemetery and decided to remove its contents.

This transfer began in 1786 after the blessing and consecration of the site and continued until 1788. The moving of remains took place at nightfall,  where a procession of priests sang the service for the dead along the route taken by the carts loaded with bones and covered by a black veil.

Until 1814, this site received the remains from all the cemeteries of Paris.

Since their creation, the Catacombs of Paris became a curiosity for more privileged Parisians. Public visits began after its renovation into a proper ossuary and the 1814 – 1815 war.

In the beginning, visits were only granted a few times a year with the permission of an authorized mine inspector. This turned into permission from any mine overseer, but as the number of visitors grew, it returned to its “permission only” rule in 1830.  Then, in 1833, they were closed completely as the Church opposed the public being exposed to human remains on display.  By 1850, the Catacombs were once again open, but only for four visits a year. Public demand led to the government allowing monthly visits as of 1867. This turned into bi-weekly visits on the first and third Saturday of each month in 1874 and then weekly visits during the 1878, 1889 and 1900 World’s Fair Expositions.

Tunnel leading into the Catacombs

Today, they are open for daily visits, so head over and spend an hour wandering through the 2kms of bone-filled tunnels below the streets of Paris! 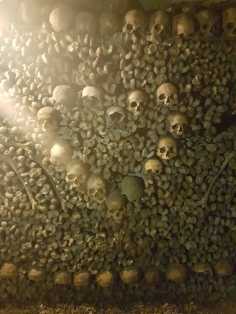 Some of the bones were made into shapes, like this heart of skulls

Millions of bones found in the underground ossuary of Paris

Walking through the Catacombs of Paris

The underground tunnels, leading in and out of the Catacombs

A wide pillar of bones in the Catacombs 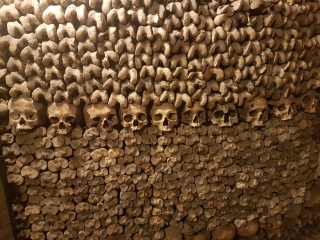 A wall of femurs and skulls

Skull patterns made with the bones in the Catacombs of Paris

Shocked by how tall the walls of bones are down here.

The Catacombs were built in old mines under the streets of Paris.

Skulls in the Paris Catacombs

The Catacombs are open daily from 10am-8:30pm (except Mondays and holidays)

Admission is granted in time slots, with the last admission at 7:30pm

Visitor numbers are restricted to 200 at any time. Admission may be delayed for a short time during busy periods. Be prepared to wait. (We did for almost 2 hours).
Distance covered: 1.5 km
Duration of the tour: 45 minutes
No toilet or cloakroom facilities available

6 thoughts on “The bones of Paris”