When in Dusseldorf, drink Altbier

Posted on November 15, 2016 by crystalburney

My boyfriend is very into beer – drinking it, brewing it, and reading all about it. Because of this, I have become a much bigger beer fan, but still only in the drinking it stage. So, after dragging him through the cobblestone streets of Dusseldorf’s Altstadt (Old Town), we stopped by a few of their famous Altbier Brauerei’s.  Altbier or ‘Old Beer’ in German is a style that was first brewed around the city of Dusseldorf.  It gets its name from using an older method of fermentation – it’s top fermented rather than bottom fermented like other lager beers.

Almost every pub in the city sells Altbier and even the more modern ones still wouldn’t be confused with a conventional lager. The best way to enjoy Dusseldorf’s Altbier is at the brewery itself, straight from the wooden barrel.  So that’s exactly what we did. 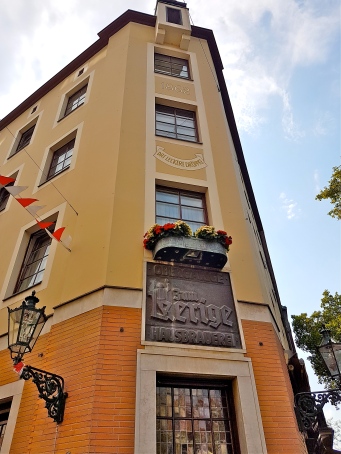 Altstadt has five Altbier Breweries located within it:

All of these Alt breweries have been around for well over 100 years and each have their own version of Altbier as their house specialty.

We were lucky enough to arrive in Dusseldorf during a festival which meant there were Altbier tents from all the local breweries set up with €2 beers! We tried Schlüssel Alt here before heading to Kürzer for our first brewery stop.

The building was old and stone and had the feel of what I felt an old German bar should be. There was lots of seating inside and stand up tables outside. From the time you order your first Altbier, the half pints just keep arriving at your table until you ask for your bill.

From here, we moved over to Füchschen.  There was some seating and lots of stand up tables both inside and out.  It was a very busy place, filled with patrons of all ages, a family on one side and a group of seniors on the other.  The brewpubs here are a place where everyone goes to hang out and share a beer or two and at some, have dinner.  The atmosphere found here is something we aren’t used to back home, but was a welcome change.

Once again, the Altbier just kept coming until we asked for our bill and the food coming out of the kitchen made us wish we hadn’t just eaten! In both places, we sat near the large barrel casks where a constant flow of Alt was being poured. It was a great way to spend an afternoon with the locals in Dusseldorf!