Posted on February 16, 2019 by crystalburney

To me, birthdays are best spent on the beach, and this year was no exception. It’s been a month now since I celebrated my 35th birthday in Nassau, Bahamas. Even though it’s so close, it’s an island I had never been to, and I thoroughly enjoyed spending a few days relaxing in the warm sunshine (a big difference from freezing cold Ontario), heading into downtown Nassau, and exploring parts of Atlantis – which just happened to be located next door to our resort! (More on that in a later post).

From Paradise Island, you have a few options for heading across to Nassau. You can take a taxi, a ferry boat or walk across the huge bridge. Since we’d been enjoying the buffets, we opted for the walk into town, enjoying the sights along the way. As Nassau is a busy cruise ship port, there are tons of shops and restaurants located in the downtown core. As avid craft beer drinkers, we found Pirate Republic Brewing Company down near the docks and stopped in to enjoy a birthday flight!

After wandering around all afternoon, we took the ferry boat back, with a very entertaining skipper pointing out sights and giving us some history along the way.

With so much to do on the various islands of the Bahamas (over 700 islands!) we only scratched the surface, but it was sure a great place to turn another year older! CHEERS!

Taking a step back in time in Havana

Wandering through Havana feels like taking a step back in time with the old colonial-style buildings and classic American cars making their way along the narrow streets.  I’ve been wanting to visit Havana for awhile now, and the city certainly didn’t disappoint. The architecture here is beautiful, with many of the buildings painted in vibrant colours. While they may be in various states of crumbling, they certainly have a lot of character. It’s easy to see why Old Havana was given UNESCO World Heritage status in 1982.

Some of the main buildings, like the Capital, are currently under construction as they prepare for the city’s 500th birthday in 2019. 500! And to think Canada has just celebrated its 150th!
With age comes culture, and Havana certainly has a culture of its own. Live music can be heard everywhere with people getting up to dance along. There’s a rhythm found in the city, that even when you spend half your day running from the rain, you still find yourself caught up in. The city also has a rich history and numerous museums to explore. 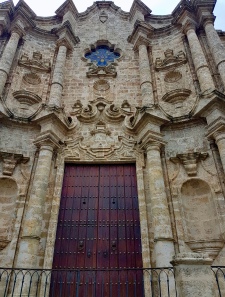 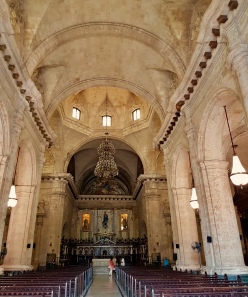 Stepping through the big wooden doors, you head into the chapel with a beautiful altar at the front.  You can also pay 1 CUC and climb up the bell tower for an amazing view of the city. 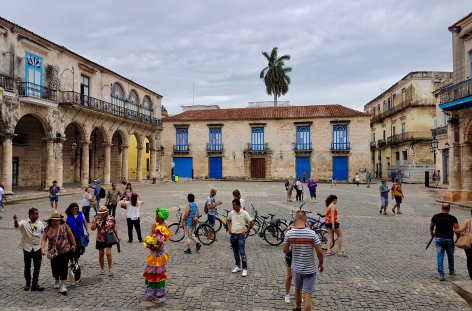 La Bodeguita del Medio, a short walk from the cathedral, dates back to the 1940s, when Ernest Hemingway used to stop by regularly for a mojito. 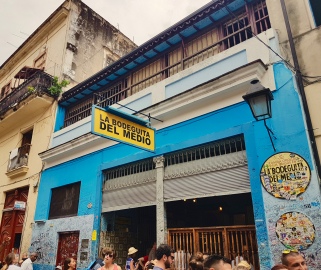 If that’s all you’re looking for, there’s a bar set up just off the street where the famous mojitos are served. Otherwise, the building hosts several stories and lots of nooks and crannies where tables are set up to serve delicious creole dishes.

Almost every square inch of the walls are covered in signatures of both famous people and those of us just passing through. We lucked out with a little top floor room with a few tables and a balcony with a view of the cathedral that now hosts our names. 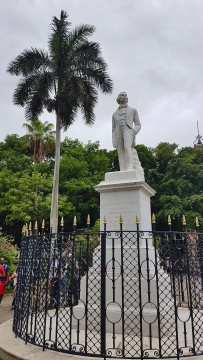 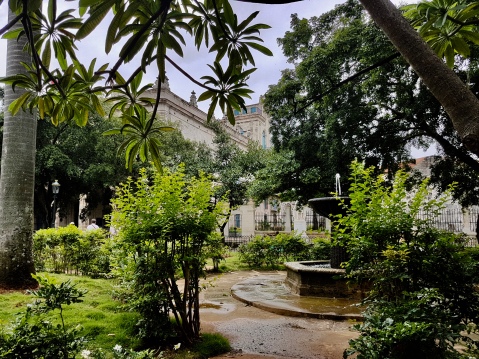 Plaza de Armas is the city’s oldest plaza dating back to 1582, when it was used mainly for the military. Today, there’s a beautiful garden and statue of Carlos Manuel de Céspedes. It’s also surrounded by buildings with huge overhangs – perfect for hiding out from the rain! 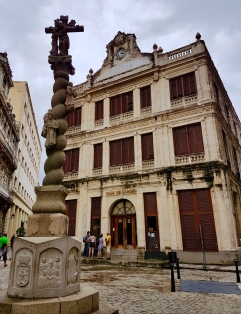 Just up the street is the Havana Club Rum museum (Museo del Ron Havana Club). We made our way over and took a tour to learn about the history and process of making Havana Club rum. As we made our way through an old colonial building, our guide gave us a brief history of this Cuban rum and then showed us all the tools used in making it. At the end, we met at the bar for a sample of Havana Club 7-year-old rum before heading into the shop where you could purchase the various rums they make here. The tour costs 7 CUC.

We also tried out two local craft breweries – Cerveceria Antiguo Almacén de la Madera y El Tabaco, which is located down by the waterfront, and Factoria Plaza Vieja which is found in the fourth plaza (Plaza Viejo). For more info on them, click here

Near the waterfront is the Mercado de Artesanía San José. This huge market is a great place to find all kinds of crafts and souvenirs. 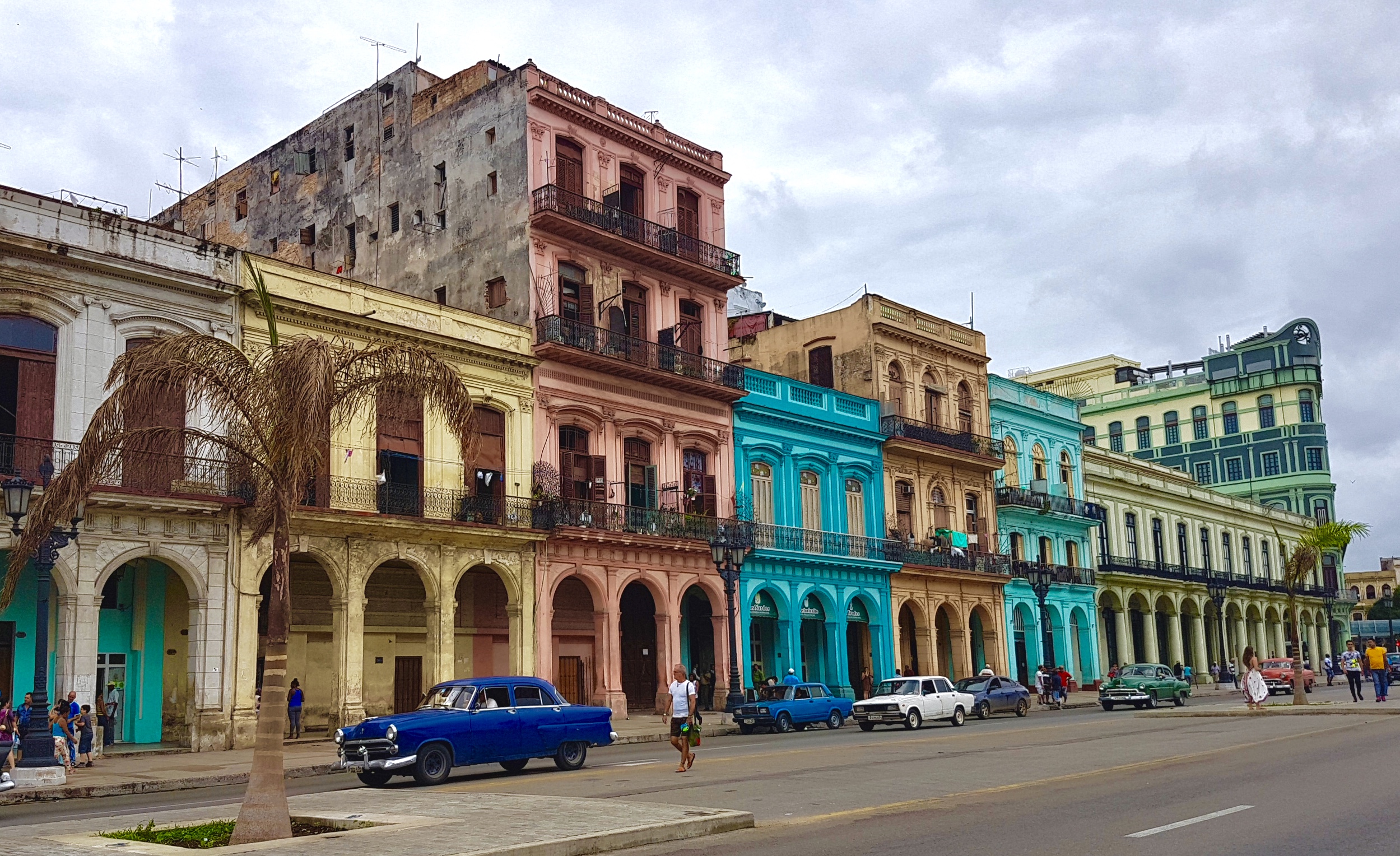 We made our way across Old Havana to wander a bit of the Prado, one of the prettiest promenades in the city, which marks the boundary between Habana Vieja (Old Havana) and Centro Habana (Central Havana), with colourful buildings, wrought iron street lights and trees.

The Capitolio Nacional building shares a remarkable resemblance to the American White House and is one of Havana’s great landmarks. The building is currently under construction in preparation for the 500th anniversary, but from what you can see from the outside, it’s an impressive building.

Continuing along, you come to the Gran Teatre de la Habana, another beautiful old building across from Parque Central. With all the old cars parked out front here, you could almost imagine great theatre stars of the 40s and 50s making their way out of the theatre after a night on the stage. 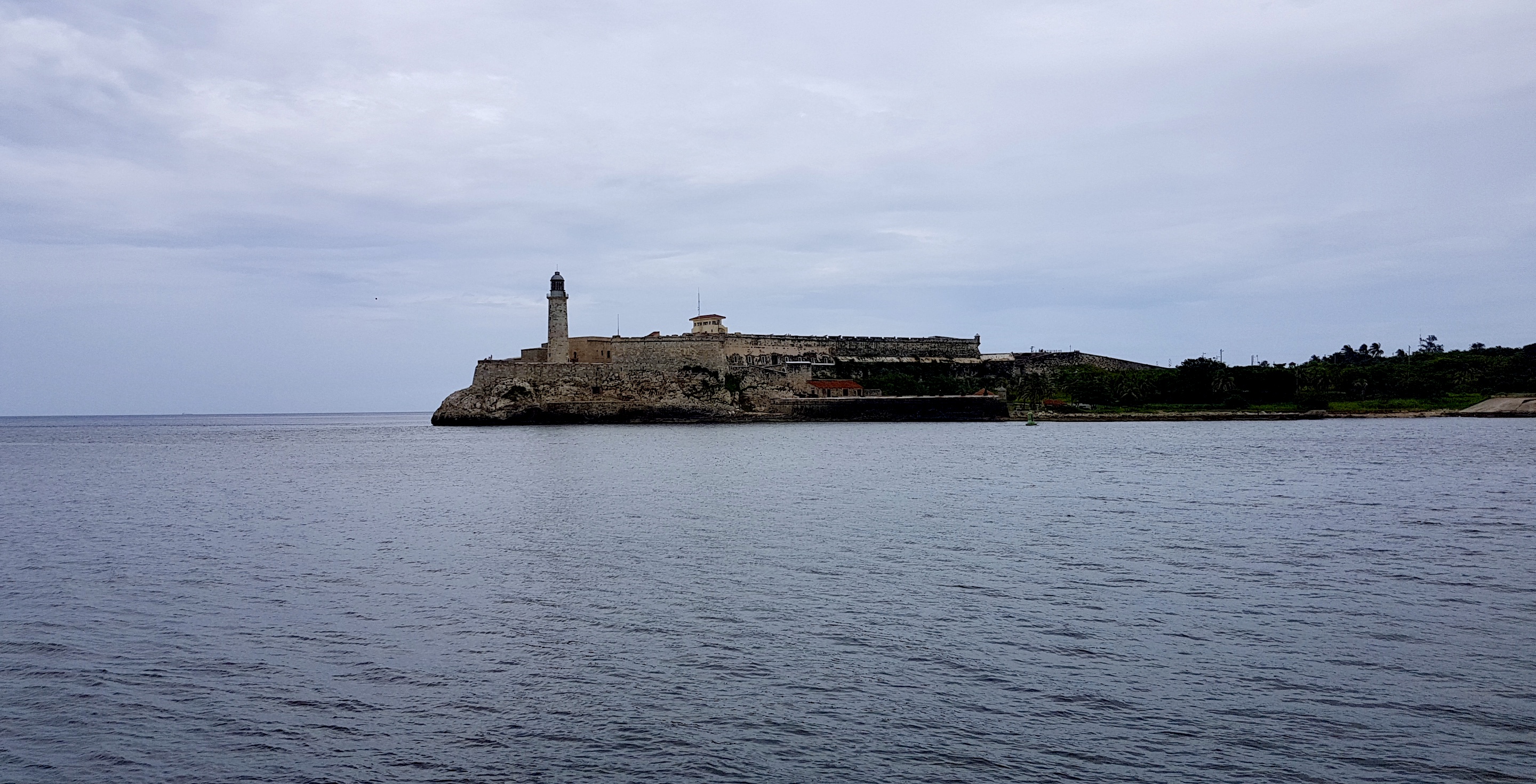 No visit to Havana is complete without taking a stroll along the Malecon – the 8km waterfront boulevard which runs from Castillo de San Salvador de la Punta on Havana’s northern shore all the way to the Almendares River which separates Vedado from Miramar.

* When you arrive, you’ll need to exchange money to the tourist Cuban Convertible Pesos (CUC). Locals use Cuban Pesos.

* Always set your taxi price before getting in.

* Old cars, horse carriages and bike taxi prices are based on distances and timing. It’s always good to show the driver a list of what you want to see.

* WiFi cards are available for a charge at most of the bigger hotels, but the service can be spotty and very slow.

Another beautiful sunset out on the water...at least until the wind and waves picked up!